newsway.co.uk
Keep a perspective on normal
Be aware of propaganda

It's always a worry for people to see younger people die, especially if they're your children or grandchildren. The good news from the Covid-19 data is that it's extremely rare for this to happen. The chances of anyone healthy and under the age of 65 dying because of Covid are vanishingly small. The chances of a grandchild dying are negligible. More good news (if you can call it that) is that a large proportion (approximately 30%) of those who get Covid-19 acquire it in hospital, so it's not so much "in the wild". In fact pubs, restaurants, theatres, shops and crowded beaches are much safer places - and are much more enjoyable. Those labeled as Covidiots last summer have been proven to innocent, even by the BBC - the tables are turned.

Over the years I have been involved with our local community I have seen many sad losses - people I valued greatly but knew that time must inevitably prevail. We are all getting older.

Truth is a scarce commodity these days

The most obvious feature since covid arrived is the fear pushed by career-driven government "advisers" with ready access to the TV and media who set the agenda that politicians must follow.

Personal freedoms have been surrendered without a murmur and censorship prevents alternative views from being heard. Even questioning is mocked. Our government is now authoritarian. Protests against lockdowns are banned and protesters bullied by police.

No matter how much anyone supports lockdown the words above cannot be denied.

One of my friends told me that she's not frightened of dying but won't be seeing her grandchildren simply because she wouldn't want them to feel guilty if she died soon after. How sad is that? The propaganda really works. My aunt, who will be 94 this year, was quite happy to be visited last summer but now fears that I am dangerous.

Not for one moment do I dismiss Covid-19 as a trivial virus, but on the other hand I lived through the 1968 flu epidemic without the slightest awareness of it. But we now have a different zeitgeist, driven by social media, mainstream media and the Internet.

Here's an article from The Lancet about previous pandemics, the role of the press and lack of panic. Worth reading to get a perspective on our current plight.

The current level of propaganda is distressing. What we're seeing is not just imploring us to take care but also justifying government policies (whether right or wrong). And we all know that propaganda is very selective with truth and easily tempted to bend facts to suit its aims. 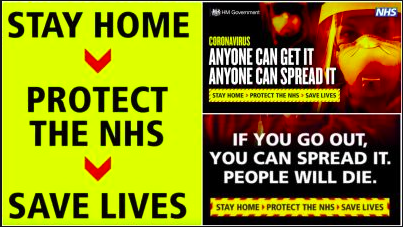 Read the advert and decide for yourself the actual risks. We're old enough to see this for what it is — psychological manipulation. All the words are calculated to hit us. Yes, people will die; no one can prevent this, it's a fact and in many cases of covid it's a mercy (or in the case of Captain Sir Tom Moore, a statistic). Fortunately, untimely deaths are very rare. 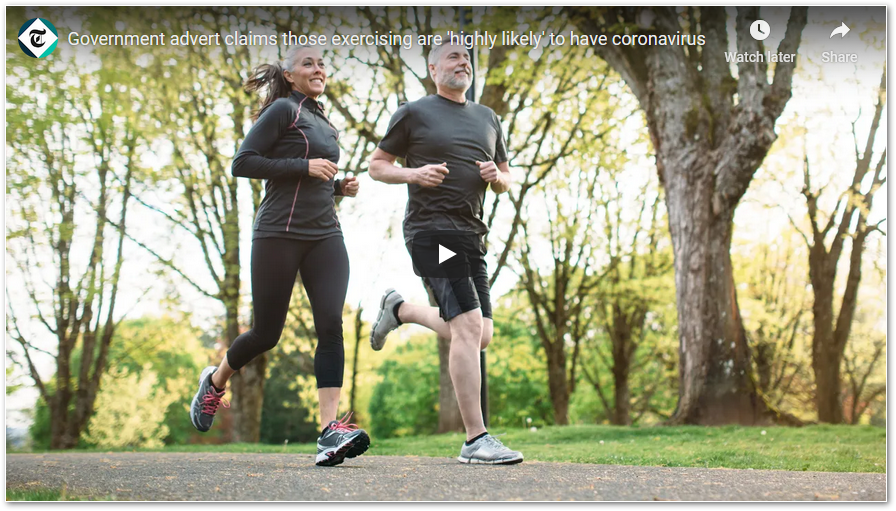 This ad targeted joggers and dog walkers, suggesting they were 'highly likely to have Covid-19'. There are so many adverts now, all contrived with the help of psychologists. Yes, we should be aware of the risks but we should also be aware of perspective and not have our focus directed to imaginary fears.

If you're elderly and vulnerable you're most likely thinking the government has got this right — preventing people going about their normal daily lives and socially mixing and potentially spreading Covid far and wide. You can reasonably assume this is good for you. The mainstream media and BBC laud this policy and denounce anything adverse. It's not possible to listen to "the news" without hearing the worst fears and numbers. And now they've found new strains with new names. But have you considered the consequences of all this fear-mongering?

I'm not suggesting that anyone should not consider their own lives first or that anyone is less valuable than anyone else, but seeking to avoid Covid so that one can get a bit older and die of something else ought to be weighed against the cost to younger people who are much less affected by the illness and will have many more years in front of them. Of course we should be concerned for our own health but please let's not expect that all risks can be removed by slaughtering society. We need to be brave, realistic and generous.

Our unquestioning support for current government policy will cause an immeasurably huge burden on the lives of those who follow us — not just in this country but worldwide, as poverty, starvation and wars will inevitably ensue. Millions will die worldwide as a consequence of current policies in richer countries.

Be a hero - ask questions!

Being old requires courage. Don't be afraid to ask:

Ask: are these the best ways I can be protected from something that might make me ill for a while but probably wouldn't kill me?

It's certain that future generations will suffer in great numbers if we elderly insist that the possibility of succumbing to this over-promoted ogre would be much worse than any alternative, even something nastier happening as a consequence.

My own circumstances? 73 years old and increasingly unhealthy as a result of endless lockdown. Am I worried about dying? Well, of course, yes, because I help you with a local chariy and have a loving family; but no, because I'm sure that will be the way of all things. Do I want to die? Definitely, and before the chickens come home to roost, but not tomorrow; I just need a little time to get my ducks in a row. I've known lots of old folk who have "had enough" and expressed a wish to move on. Nothing wrong with that.

Previous British generations fought selflessly and gave their young lives in millions to keep the freedoms that have been revoked under the pretense that we need to be protected from something that, in many cases, can only be detected by testing. Look around you; how many dozens of people do you actually know who've caught Covid outside of a hospital or care home and died long before their time? Keep this thing in perspective. Of course we should take care of our own health as best we can and expect respect for this caution, but spare a thought for:

Be human. Enjoy your remaining years not being afraid. Above all, let others see your smile.

How dangerous is Covid-19?

So most people were wrong by a factor of 10 and a significant number of people wrong by a whopping factor of 50. In fact about 600,000 people die each year in the UK simply because that's natural.

Obviously older people are more at risk than younger people but people do not seem to know how NOT life threatening this covid thing is. That's not dismissing it as a trivial illness but the actual death rate is really not as bad as the media would have you believe.

For people under 65 the risk of death is negligible. Our children and grandchildren are paying a very high price to keep us oldies going a little bit longer.

The TV and media only give you alarm, not perspective — but you probably know that, that's how they sell the news. The current, January 2021, figures may be large but they're not unexpected. See the graphs below then read this BMJ article explaining how the government uses the science.

Maybe you should take comfort from the graphs below — prediction versus reality. Even the most alarming predictions show the worst will be over by next summer, but the reality is that it's nothing like as bad as predicted — except...

Despite those dire predictions, the surge in early January seems to have caught them off guard and the Nightingale hospitals are not ready, having been decommissioned in the summer and not re-prepared ahead of this expected surge. We are very naughty, getting old and being ill in such large numbers, but not dying. 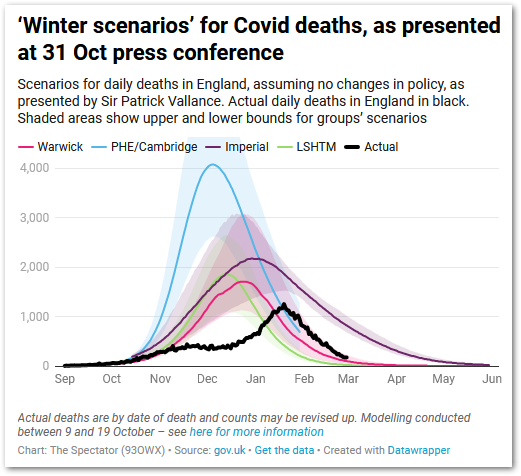 This graph shows that the current number of cases for people over 60 is declining rapidly.

All graphs of mortality follow the same pattern year after year, with 2020 having seen a spike in March-April but fairly normal thereafter. [Check the link below to the summary by Dr Kendrick where he uses more graphs to illustrate this point.]

We now have vaccines that should release us from the awful predicament of 2020. Let's just hope there will still places to go when we're eventually allowed to venture out.

You'll be aware that the government is "following the science". This article in the well-respected British Medical Journal (BMJ) explains just exactly how the government uses the science to keep us all safe and get us back on the minibus as soon as possible — not to be missed.

What is left to say? An excellent summary from Dr Malcolm Kendrick explaining where we are now, with a good look at what figures tell us.