It would wrong to say that the subject of face masks has been properly researched in regard to Covid-19. This virus hasn't been around long enough for thorough studies and despite masks being mandated, the rise in cases has not stopped. Many people wear them out of fear of being harassed or punished.

As the epidemic passes, the wearing of face masks could be seen as one of the major factors of success and thus validated. There may be data indicating that face masks have some effect, however, awareness and physical distancing are admitted as probably better precautions (see below). (Interestingly, in researching this I find that Google actually curates data and if it disagrees with their political algorithm they don't include it. AND I thought that the search engine DuckDuckGo would be independent, but it seems that DDG is under Google, so no better there. Using other search engines I find that the best advice on masks is that they work in conjunction with physical distancing, hand washing etc. and providing that they're fitted properly and not touched. It's easy to understand how a facemask could reduce spray from a mouth but evidence of efficacy is sorely lacking in proof.)

Government guidance on how to wear a mask

Their guidance is here. For convenience I've snipped out the relevant section to see below. 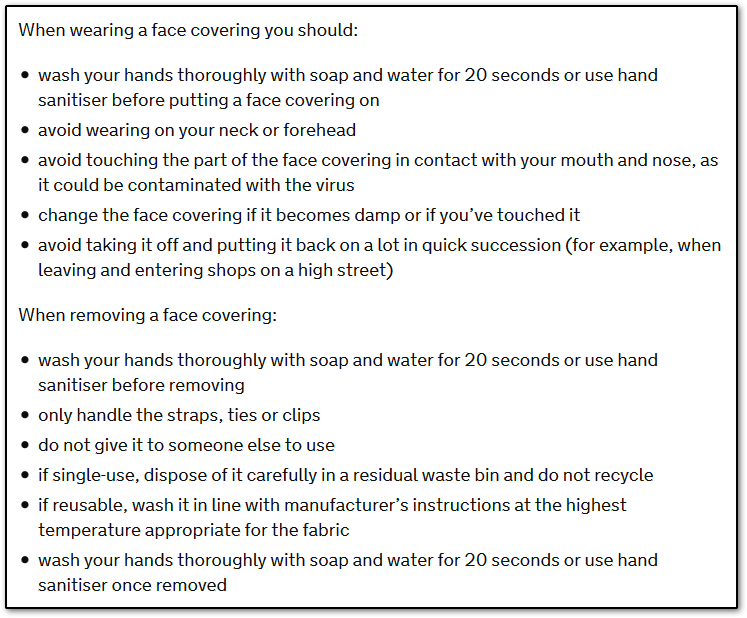 If that doesn't demonstrate the level of their naivety then I'll be a monkey's uncle. Who TF is going to go through that rigmarole on entering and leaving a shop? If people aren't adhering to that guidance then what's the use? It's quite believable that masks work in a laboratory but the field test so far shows that mandatory wearing of masks by the public has not stopped a rise in cases. No surprise really.

If you disagree here's your challenge - find four graphs showing countries where the mandating of masks coincides with a reduction in cases. Of course, you might find the opposite.

Whatever else can be said about masks the fact is that wearing them in public is dehumanising. People relate to other people through their faces - their smiles and expressions. Compelling everyone to wear a mask, knowing that most people will wear them wrongly, is against our human rights.

Keeping a sensible distance from people is probably more effective than wearing a mask (see below). Generally it's acknowledged that close proximity needs to be for minutes rather than seconds, so briefly passing close to someone in a shop is unlikely to be a risk. Similarly walking with someone or passing someone outdoors is a negligible risk. Elevating a negligible risk to irrational behaviour indicates a phobia.

In this case wearing a mask is a demonstration of fear.

World Health Organisation reverses course
On 4th April: "'There may be situations where the wearing of masks may reduce the rate at which infected individuals may infect others,' Ryan said."
A reversal of course based on what? "May" leaves open the possibility of "may not". Hardly conclusive. And how long had the situation with Covid been researched, as by 4th April 2020 Covid had only been with us a few weeks.

Cambridge Research on face coverings suggests
On 27th July: "While it is not clear how much of an effect face coverings have, scientists have urged policymakers to encourage the wearing of face coverings because the risks are minimal while the potential impact is important in the context of the COVID-19 pandemic."
Note that political pressure is being applied.

World Health Organisation says masks are a sign of solidarity
On 3rd August: "This week, we’re also launching a mask challenge with partners from around the world and we’re encouraging people to send in photos of themselves wearing a mask. As well as being one of the key tools to stop the virus, the mask has come to represent solidarity."
That a mask is key tool is unproven. Encouraging the wearing of masks to show solidarity is political - like waving a flag - proving your allegiance.

In this case a mask represents a belief that they're part of a larger body.

For some people it's not a matter of fear or solidarity, it's showing that they care about the possibility of transmitting the virus, even when they know they have no chance of having it.

In this case a mask represents their virtue.

Going with the flow

The law now requires wearing "face coverings" in most public places - a whole list of places and dependent on whether you're standing up or sitting down! [ Who makes up this stuff? ]

In this case wearing a mask indicates you're concerned that someone will challenge you. You don't want to argue. You have no opinion in the matter. This what most people all over the world have felt when invaded by a new power - just get on with it and keep your head down. Never mind the atrocities being committed.

This is probably the majority.

Now I know this is not a scientific or a true epidemiological view but consider this: at the worst of the death curve, April to end of June 2020, masks were very rare in big supermarkets. Neither the staff nor the shoppers wore them, me included. By the end of June this epidemic had finished - less than 50 deaths per day. Tesco did not close; I did not get infected. So why the fuck were they made mandatory in July? It would be impossible to prove that the mandatory wearing of masks since July has led to the surge in positive "cases" but equally it's hard to disprove. But never mind, there has not been a surge in hospitalisations or deaths, so it seems there's little correlation between positive tests and eventual deaths.

Studies found on the Internet

"For now, Osterholm, in Minnesota, wears a mask. Yet he laments the 'lack of scientific rigour' that has so far been brought to the topic. 'We criticize people all the time in the science world for making statements without any data,' he says. 'We're doing a lot of the same thing here.'

Nevertheless, most scientists are confident that they can say something prescriptive about wearing masks. It's not the only solution, says Gandhi, 'but I think it is a profoundly important pillar of pandemic control'. As Digard puts it: 'Masks work, but they are not infallible. And, therefore, keep your distance.'"

Importantly, some Internet articles on the study of efficacy of masks have been removed or retracted because they do not follow official guidance. Whilst this does not prove an attempt to limit freedom of information it does raise questions about censorship.

Take for instance this link to the Center for Infectious Diseases at the University of Minnesota. As of 30 September 2020 it still works. But see in there:

Editor's Note: The authors added the following statement on Jul 16 [2020].
The authors and CIDRAP have received requests in recent weeks to remove this article from the CIDRAP website. Reasons have included:
(1) we don’t truly know that cloth masks (face coverings) are not effective, since the data are so limited,
(2) wearing a cloth mask or face covering is better than doing nothing,
(3) the article is being used by individuals and groups to support non-mask wearing where mandated and
(4) there are now many modeling studies suggesting that cloth masks or face coverings could be effective at flattening the curve and preventing many cases of infection.

Where are the modeling studies referred to in (4), and the word "could" is hardly convincing. This is political pressure and not science.