As a preface to this site I must point out that I might not be right. My opinions are, of course, personal, and yours are your own and quite probably different. I have endeavoured to provide true facts based on reliable sources. I'm looking for signs of hope. We all look for hope.

The government's policy in late 2020 is no longer about preventing the NHS from being overwhelmed and saving lives, although that's still the mantra. It's now about testing people to see if they've got Covid-19. How bad can this virus be if you need to be tested to see if you've got it? The NHS was never in danger of being overwhelmed and emergency "Nightingale" hospitals were never needed. The dire predictions by government advisors were wrong - yet they continue in post and make more dire predictions. They were wrong first time and there's little chance they'll be right second time. But if they're wrong twice and we've been through all this destruction as a consequence, they should be sacked, together with those acted on it without seeking a wider understanding.

We do know a lot more now than we did at the beginning of this epidemic. There is a lot of data from all round the world that shows Covid-19 is in nowhere near as dangerous now as it was in March and April. The final months of 2020 will be interesting, either Covid-19 will overwhelm us or gradually be accepted as endemic or passed. Keep hoping. Check back later - I'll try to keep up to date.

There is no doubt that when the WHO declared coronovirus to be a pandemic in early in 2020 there was much concern about the death rate, particularly amongst the elderly. Since those early days the hospitalisations and death rates have tumbled and are now almost negligible. We stayed home, we protected the NHS, we saved lives - and our reward is now more of the same plus "Covid Marshalls" to keep us safe. The idea of zero Covid cases, which now appears to be a pressure, is, quite frankly, impossible in a connected world. No one has yet found a cure for the flu or the common cold. No one can stop people getting older and thus being more likely to die. The idea that we can defeat it is a delusion. [Yes, I know the cartoon is an illusion, not a delusion, but I wanted to allude to it as it shows the impossibility, and no matter how far Johnson goes in the same direction, success will elude him.]

Using data provided by the UK government we can see that the WEEKLY death rate of those dying within 28 days of a positive Covid test in November 2020 is not increasing dramatically. Nothing more than might be expected for a respiratory disease as winter approaches. And as most deaths occur in people with underlying health problems the chances of dying if you're reasonably healthy is negligible, no matter what your age. It's a fact that very few people live to 100. If a death is imminent anyway, it will occur soon. [ If anyone tells you this is all worth it if it saves one life... bestow kindness and sympathy, for they are of little brain. ]

The graph of deaths shows a very small increase in recent times but this could hardly be called a wave, let alone a spike. It's entirely to be expected as a seasonal occurrence.

There are more graphs showing official data of hospitalisations etc.. The only one of slight concern is the rise in cases, as determined by testing, but this increase does not yet have a corresponding rise in deaths so it needs to be treated with caution. The increase in cases detected must, at least in part, be due the huge increase in testing. The page on numbers explains the effects of prevalence and error. It's quite likely that only 25% of those cases are actually infected.

Another interesting link on statistics is this summary of a pilot study into the efficacy of vitamin D. [ It refers to the original document here ]. Again this gives more hope and it's surprising that there aren't more people trying to prove or disprove it.

As most governments all around the world are behaving in similar ways, this is a classic example of "groupthink". Most politicians are looking at what's being decided in neighbouring countries and following suit. If they don't they are mocked by the press. Indeed there are a lot of adverse comments in the press about the Swedish policy of NO lockdown. Sweden has achieved pretty much the same outcome as most other European countries but without an enforced lockdown, just lots of commonsense caution.

Did you know that the average age of death in the UK from Covid is well over 80? It's not killing young people but the panic is destroying the present and the future. 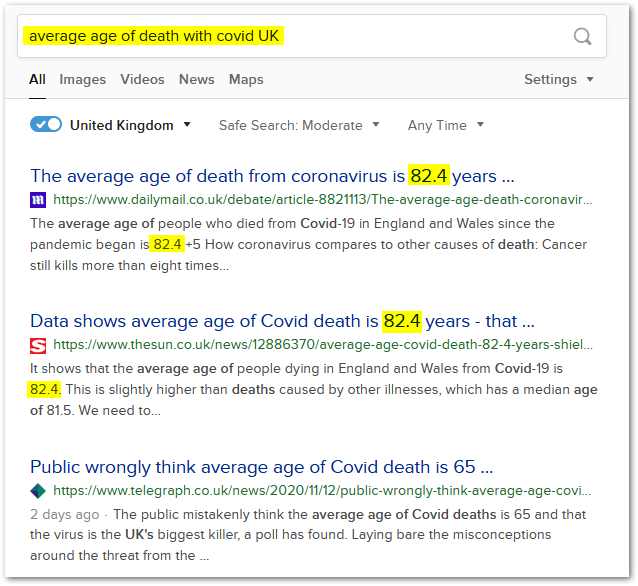 More graphs from around the world.

If you're interested in an optimistic view of epidemics you could watch this YouTube video or this one published on 4th October 2020. To be fair, there are challenges to this optimism. There are others who say the author has been selective in the data used. Although nothing is certain, you should hope it will play out in the coming months. Another view on what's happening as we head into the second lockdown can be seen here. In fact the tail end of 2020 will either prove the doom-mongers right or they should have their credentials removed...

Incompetent use of Emergency Powers

The government has taken on "emergency powers" that enables a small cohort to make up rules without wider reference. Decisions are being made by ministers chosen for their passion for Brexit rather than any proven skills in the departments they run; decisions that ignore the wealth of evidence indicating their folly. The vote on 4th November to enter a second lockdown could fairly be compared with the vote to invade Iraq because they had "weapons of mass destruction" - a vote based on wrong information. Their continuing ignorance of perspective is beyond understanding.

Although all generations are suffering, it's the youngest who will suffer most and longest. The younger they are the more years they will be paying back this huge debt incurred just to keep us oldies going a bit longer. This is not just a huge debt, it is an unprecedented debt that will inevitably lead to unforeseen consequences.

I am 73 years old and thus more likely to die if I get Covid-19 than people younger than me. I'm questioning the UK government's doctrinaire policies that hurt so many people yet have not fixed the problem they fear. Their policies have destroyed so many things I hold dear and have enjoyed in my latter years - live entertainment, social interaction, foreign holidays etc. All gone.

It's unreasonable to assume that all old people want to live in continuum, in these unpleasant circumstances of lockdown and deprivation and, in some cases, not even aware of being alive. Normal health maintenance has been abandoned. It's very sad. Personally, I'd rather my children and grandchildren were free to enjoy their lives and I'll take my chances, cautiously, in that same freedom. I'm not greedy for a few more years of old age at such a huge cost to them.

If people aren't ill enough to need hospital treatment and are not dying in their thousands there must be questions about why we are being made to suffer so much to avoid NOT being dead.

We're NOT in this together

The worst, the very worst of the political drives is to encourage people to snitch on others if they're not following the very latest diktat. What better way is there of achieving control of society than setting people against people, with anonymity that ensures you SUSPECT EVERYONE. Who's the quisling? Who can you trust? Was it a neighbour or a passer-by? Does the government not understand that it's creating a 1984 society? What would George Orwell say? Everyone is encouraged and empowered to agree with the government - but liable for punishment if they disagree. Hey, what country is this?.

The quickest way to return to normal is for the government to admit that lockdown measures have no proven success in reducing deaths, then admit that this virus is not as deadly as first thought and encourage people to remove their masks but take care and be responsible. Those who are worried can take their own precautions. Let's hope this virus has run its course.